Every 5-star hotel around the World I know would like to keep its floors squeaky clean. In Singapore, you expect that even more. So, imagine my surprise when I found the floor littered with peanut peels at a bar in a hotel. It’s not any hotel. It’s the Raffles, the most iconic hotel in Singapore. 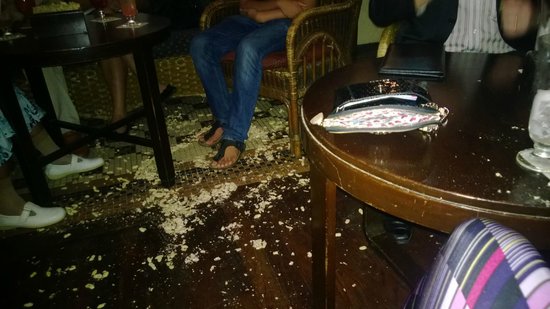 This intriqued me a lot and decided to find the reason for this mess. I requested a meeting with the head bartender and promptly got one. He said that its a tradition that dates back 130 years. In the early days, the hotel was frequented by European plantation bosses. Peanuts were served while they waited for their drinks to be fixed. They would throw the peels around with an air of insouciance. And thus began the tradition.

Another bartender told me that the crunchy sound of the feet crushing the peels has become a signature sound.

Also, I feel it’s a branding technique by the hotel. By being a rebel, they bring an air of coolness. By encouraging littering in Singapore that takes it’s cleanliness seriously, they make you and the hotel look cool.